These guys really know how to clean up after a T10 typhoon. Winds of 173 kph and gusts of up to 223 kph were reported by the Hong Kong observatory, stronger than Hurricane Florence that hit North Carolina last week.

We emerged from our shelter the day after the storm and snapped a few pictures of fallen trees and buildings. Unfortunately, Toto was nowhere to be seen amongst all the wreckage. The following collection is taken directly outside our apartment and in the park over the road. 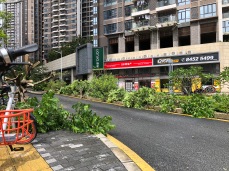 On Wednesday, myself and another trailing spouse went for a walk along the Nanshan coast. We got off the metro at OCT and looked around for a bite to eat before we set out. To my surprise things seemed very normal here in comparison to the other areas I’ve seen this week. The next collection is taken from OCT. Can you see any typhoon damage? 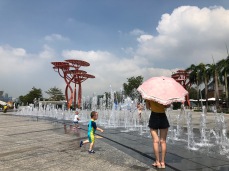 After lunch we attempted to cross the road via the metro station. First exit was blocked by barriers and security guards. ‘OK it must be damaged’ I said. ‘Lets try the other exit.’ Ooof, same again! We headed back up to OCT and thought about crossing the road. However, assessing our chances of survival as very low, we decided to walk till we found a subway or bridge. Around 10 minutes later and after passing approx 1200 MoBikes we found a subway. Heading in to the tunnel, we had high hopes we’d be able to get to the other side and commence our sea front hike to Shekou port. OK, the tunnel felt like something out of a horror movie. Worn out walls, check. Dripping sounds, check. Flickering lights, check. Scary looking person in middle, check.

Needless to say the other side was blocked by an angry looking security guard waving his hands frantically. We headed back the way we came and continued along the busy road till we came across a bridge. On the other side we where faced with another man waving at us to turn back. We admitted defeat and headed towards the closest metro station, Shenwan. This is where we saw our first obstacle. A huge fallen tree which had partly crushed the bridge and could potentially collapse at any moment.

We shimmied under the tree like ninjas and headed down the path only to find the pavement had suffered a similar fate with trees strewn everywhere. With some careful navigating, we walked down the busy road till we found an opening back to the safety of the path. Just one problem, the path was overgrown and could contain a whole manner of different wild creatures. My traveling companion decided to find a large stick in which he could fend off any attacking cobras should they decide to attack us. Our luck was in and we safely navigated the 10 metre stretch of jungle without incident.

Just before we reached the metro station, we came across the largest row of MoBikes I’ve ever seen. Anyone would think it was a mirrored optical illusion, to which I cannot confirm as to whether it is true or false. We turned into the metro soon after. Below is the evidence.

So we took the air conditioned shortcut to Shekou ferry terminal as by now the midday sun was taking it’s toll on my unprotected skin. Upon arrival we saw more typhoon damage along the road leading up to the terminal.

If you look in the distance, that silver building is the new ferry terminal roof which probably cost a lot of money. Upon closer inspection you can see the damage and it’s bad!

After checking out the ferry prices, which will probably rise considerably once somebody gets the bill for that roof, we headed back to our apartments showered and went out again. Wednesday night is quiz night at The Brew, Futian. Every time I see the light shows cast against the buildings it makes me smile. I’m not sure it’ll ever get old.

By this time it’d become apparent I’d got some mild sunburn on my neck so I should take it easy on the Tsingtou’s and salty veggie pizza. Oh and also, to top off the day our team only went and won the quiz!

View all posts by Paul S

One thought on “The Big Chinese Cleanup”